In his early childhood Patrick Delabre discovered his passion for music, and he learned to play keyboard instruments and choir singing. Then he studied organ and composition at the National Conservatory of Lille where he received an introduction to choir conducting.

At the Conservatoire National Superieur de Musique of Paris he continued his studies in harmony, counterpoint, fugue and organ, winning four prizes.

In 1976 he was appointed assistant organist at Chartres cathedral with Philippe Lefebvre as main organist ; he took over from him in 1986 as head organist.

His musical activities grow through the organ of the cathedral teaching and giving concerts as well as educational presentations. The local authorities of Chartres and Lucé have asked him to take in charge their organ and composition classes from autumn 2003 on.

In Chartres cathedral, he has recorded a CD dedicated to works of J.S. Bach and C. Franck.

The record company Forlane entrusted him with a composition for children’s choir and instruments. These fifteen arrangements of popular traditional songs have been performed by the National Music School Children’s Choir of Chartres in June 2002. 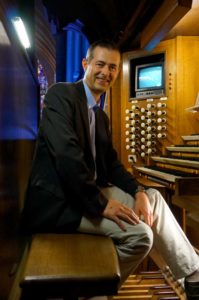 Laurent Bouis was born on 1967.
After crowned with the musical baccalaureate studies, he prepares a musicology diploma at the University of Sorbonne in Paris.

Then, he enters the Schola Cantorum of Paris in the class of André Fleury, where he successively gets the virtuosity diploma, with distinction, and the concert diploma. He also studies composition.

He later works at the “Conservatoire national de Région” of Lille in the classes of Jean Boyer and Aude Heurtematte.

In 1987, Laurent Bouis was unanimously prize-winner with jury congratulations of the U.F.A.M. international organ competition, Paris.