A priest will accompany you,
you wish to celebrate a mass at Notre-Dame de Sous-Terre

The pilgrimage is in the image of the numerous groups, coming from all over the world, who celebrate mass in the intimacy of the crypt – in front of Our Lady of Sous-Terre.

Today, coming from all over the world, groups follow one another. Young people and adults come in turn to seek in this privileged place the true face of their faith. A faith that is perfectly current.
However, Chartres has been calling for centuries…

The relic formerly known as the “chemise” and now called the Veil of the Virgin was given to the Church of Chartres, around 876, by Charles the Bald. Immediately, its fame contributed to the development of the pilgrimage. It was said that she had worn this garment on the day of Christ’s birth. Chartres thus became the place among all to pray about the incarnation – the coming of God to earth.

The “holy shrine” was kept in the altarpiece of the high altar; pilgrims would go there to venerate it, pray for a long time and bring back from Chartres small badges in the form of a “shirt”.

It is in the 12th and 13th centuries that the Chartres pilgrimage seems to have reached its greatest fame. Guibert de Nogent says that the name and the relic of the Virgin are the object of veneration of almost all the Latin world.
In a document of 1260, the pope Alexander IV attests that the devotion towards Mari attracts to Chartres an innumerable multitude of faithful.

At the time of the great affluences, with the Assumption and the Nativity of the Virgin, the pilgrims spent the night in the cathedral.
The Chartres sanctuary also enjoyed great fame in the 17th and 18th centuries. Among the illustrious pilgrims who came to pray there were St. François de Sales and St. Vincent de Paul.

The Revolution temporarily put an end to the pilgrimage practices. The crypt was not restored until 1855 and was not fully restored until 1860.
This period marked the rebirth of the pilgrimage, which immediately took on a magnitude that is still unsuspected today. In 1873, for two days, fifty thousand faithful were welcomed to Chartres for a national pilgrimage. 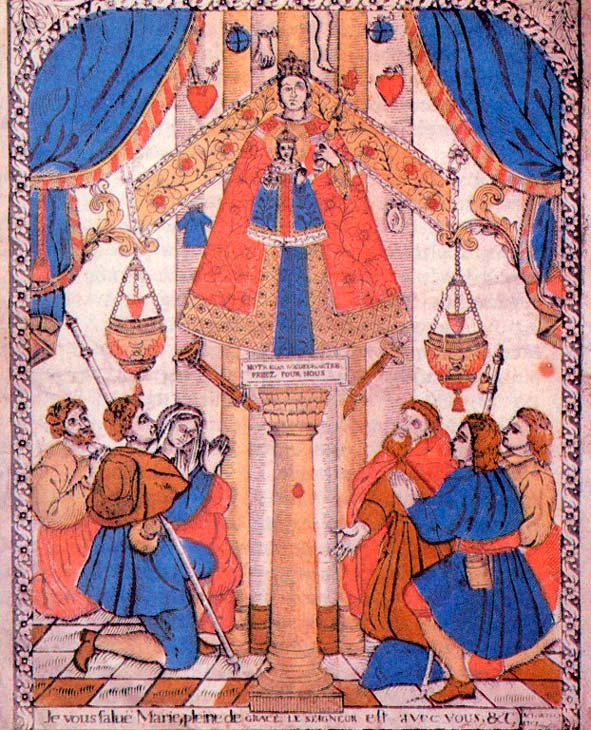